In winter, it gets quite cold in Nordhausen, a city with a population of close to 43,000 on the southern edge of the Harz region in Thuringia, Germany. To make sure the homes are warm and cozy when temperatures drop below zero, EnergieversorgungNordhausen GmbH (EVN) runs three cogeneration plants that supply the city with heat and power. The cogeneration plant “Mitte”, the largest and oldest one of the array, was extensively renewed without halting operations. “If the consumers don’t even notice that we’ve replaced and modernized our technology, this means that we’ve done a good job”, says Hans-Jürgen Mund, Technical Manager Heat of EVN.

The cogeneration plant “Mitte” mainly supplies housing societies, but also some smaller businesses and private homes. The modernization and engine replacement were to be completed within eight months. This target was complied with, and the operation was smoothly resumed on October 27, 2017, well in time before the onset of the cold season.

In 2017, the time had come for an overhaul of the five gas engines in the cogeneration plant “Mitte”, which were gradually growing old. “We decided to put wood behind the arrow and replace the engines in order to upgrade our cogeneration plant technology”, says Hans-Jürgen Mund, drawing attention to the considerations during the planning phase. “The introduction of a new cogeneration law provided additional motivation for the engine replacement.” In the project tender procedure, Caterpillar Energy Solutions was awarded a contract for four modern MWM TCG 2020 V20 gas engines with a total output of 8,000 kW. “As we had already worked with MWM engines from Mannheim, we knew how reliable and efficient the gas engines would be”, explains Mund.

Formerly, the walls of the hall used to be opened for maintenance measures and then closed again, which was a lot of work. For the comprehensive modernization, the new four (instead of five) engines were placed on new fundaments, large gates were installed in the walls, and the electronics, control systems, ventilation, and wiring were fully replaced. Only the old boilers have been retained. According to Hans-Jürgen Mund’s colleague Dominique Brandl, this was the most time-consuming part of the project: “At times, the construction site was teeming like an anthill.” The old engines were removed and the structures for the new TCG 2020 V20 gas engines were erected by up to five teams of specialists who worked on site concurrently. 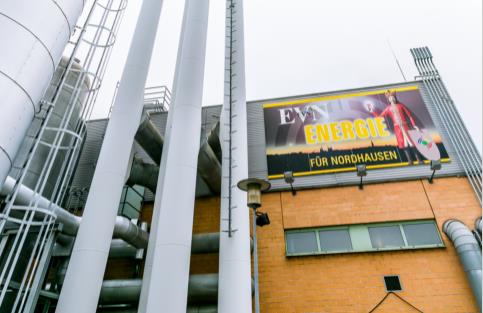 “The gensets make less noise, they are more eco-friendly, and their performance is higher”, observe Hans-Jürgen Mund and Dominique Brand. “Thanks to the new engines, our energy supply in Nordhausen is now based on state-of-the-art technology.”

For the four new MWM TCG 2020 V20 engines, a comprehensive maintenance agreement has been concluded with the MWM service center in Erfurt. In this way, MWM engineers and EVN ensure the reliable and hassle-free operation of Nordhausen’s power and heat supply.